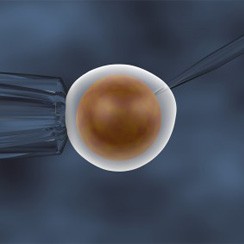 What is in vitro fertilization?

When a couple has undergone the complete sterility study and a diagnosis is made, one of the treatments which is usually indicated is in vitro fertilization (IVF). This is a technique of assisted reproduction which first consists in achieving the fertilization of the gametes (oocytes and spermatozoids) “in vitro”, that is, in the laboratory, to afterwards, transfer the result of this fertilization, the embryos, into the uterus of the woman.

What does the IVF treatment process involve?

Not all the ovules are apt for fertilization and nor are all those which have evolved to embryos. Neither are all the embryos transferred to the uterus apt. Therefore, we need hormone stimulation treatment to provoke the growth of several follicles and the oocyte which the two ovaries contain. These treatments usually last 12 to 15 days and are, generally, preceded by a treatment with a hormone preparation denominated GnRH agonist which avoids the interference of the spontaneous functioning of the ovary with the stimulant treatment.

Each treatment is individualized according to the patient and requires controls during the stimulation (echographies and hormone analysis) which imply attending our center. As this process has been simplified and  tests are easy to perform, minimum interference is caused to the day to day lives of  the couple.

When the majority of follicles reach their optimum size making the extraction of mature eggs held within viable, a follicular puncture is programmed for egg retrieval.

2.-Follicular puncture and collection of oocytes:

A follicular puncture is a very simple surgical procedure which does not require hospitization.  The procedure is performed transvaginal with the aid of echographic technology and imagery.

During the puncture, the follicles containing the matured eggs are aspirated.  The follicular fluid containing the eggs is collected and taken to the ART laboratory which is equipped with the advanced technology necessary for the culture of eggs and sperm.   The eggs are then placed in Petri dishes with the appropriate medium within an incubator which maintains optimum conditions for culture until the time of in vitro fertilization.

3.-Preparation of the semen sample:

If the provider of the semen sample is the partner of the patient, their presence at the clinic on the day of egg retrieval is necessary as a semen sample will be taken on the same day.  Obviously the exception will be in cases where the semen sample has been provided by a donor or is a cryopreserved semen.

Regardless of the semen sample’s origins, it will be analysed and prepared in the laboratory in order to obtain the most viable spermatozoides (generally those with the greatest mobility) which will be used for the fertilization of the oocytes.

The fertilization of the oocytes in the laboratory may be performed through a standard in vitro technique or by intracytoplasmatic spermatozoid injection.

Standard in vitro fertilization consists of adding a determined quantity of spermatozoids to the culture plate containing the oocytes. This technique is only used when the semen sample provided is within the parameters of normality and the origin of sterility lies in the female.

Intracytoplasmatic spermatozoid injection (ICSI) is used in cases where the orgin of infertility lies in the male. ICSI consists of injecting a healthy spermatozoid in to each of the “mature” oocytes to assure fertilization occurs.

In both cases, around 70 % of the oocytes are fertilized successfully.

Oocytes are observed to determine fertilization and growth and to check for  any signs of abnormalities. If development of the fertilized oocytes (embryos) is found to be normal, patients will be contacted by telephone and provided with an appointment date for embryo transfer.  Usually, embryo transfers are arranged 2-3 days after oocyte retrieval.

Embryo transfer consists of placing the selected embryos in the uterus of the woman. After the puncture hormone treatment with oral progesterone is begun and is maintained during several weeks if pregnancy is achieved or, to the contrary, until the appearance of the menstruation.

The number of embryos transferred is a variable which depends on different factors and is finally decided together and by common agreement between the professionals of the center and the couple. Factors are varied as age, the causes and length of sterility, previous pregnancies and specially, embryo number and quality are considered. The maximum legal limit of embryos which may be transferred is three.

While the physician prepares the patient for the process, the biologist places a catheter joining a syringe with a small quantity of culture medium with the selected embryos. With the aid of echography, the physician introduces another catheter into the uterus. This catheter will be used as a guide to later slowly introduce the embryos in the most adequate site.

After the transfer, the patient remains resting for approximately 30 minutes. Finally the patient is informed of the schedule to be followed during the following days until the results of the pregnancy test are known two weeks after the follicular puncture.

At the time of egg retrieval, the woman is instructed to take the hormone progesterone orally on a daily basis.  This must be continued until pregnancy is either confirmed or menstruation begins.

Embryo cryopreservation  or ‘freezing’ is a technique used in assisted reproduction to preserve viable embryos left over from  IVF cycles with the intention of facilitating future frozen-thawed embryo transfers. By cryopreserving embryos, the possibility of success in further cycles is increased. Multiple transfers from one single egg collection maximises the potential for conception and eliminates the need for patients to repeat hormone stimulation treatment and the original controls required in a complete IVF cycle.  In addition in cases where unforeseen circumstances exist which may affect the success of the transfer/implantation the process allows for embryos to be preserved until the patient is in optimum health and transfer /implant conditions are considered normal and viable.

How are cryopreserved embryos transferred?

In the case where previously frozen embryos are to be transferred, the patient will be seen and a medication schedule will be provided (estrogen and progesterone pills or patches) in order to prepare the uterus. An evaluation by echography will be performed around day 14 of the cycle and the date for transfer will be decided.

When the couple wish to undergo the transfer of the cryopreserved embryos, the thawing process of the embryos will begin.  Around 70 % of the thawed embryos (percentage varies in  each case) are viable for transfer. The transfer process is exactly the same as that of fresh embryo transfer.